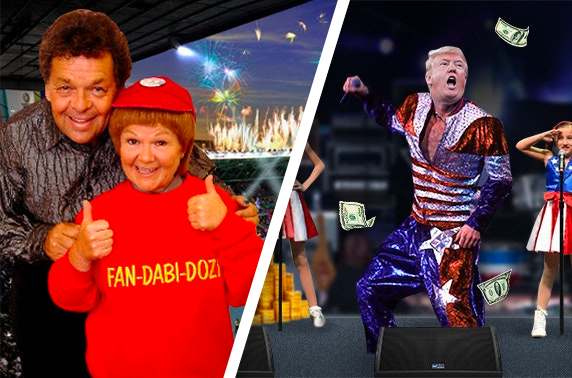 Take a look back at our favourite April Fools gags, from Fyre Fest in Scotland to Trump in the Park

This year, we didn’t think it was right to do an April Fools gag, but that hasn’t stopped us getting all nostalgic for previous years.

Take a trip back through time as we round-up our April Fools of years gone by.

Naturally, we had first dibs on tickets – offering our members a star-studded opening ceremony featuring The Krankies, Michelle McManus and daytime TV starlets Colin and Justin. Which begs the question… whatever happened to Colin and Justin?

2015 – Online voting in the General Election
Remember when elections were a novelty because they didn’t happen every 5 minutes? Well that year was 2015, and we got on board by offering our members a definitely-legitimate chance to vote online, even throwing in two bonus votes and a complimentary itison pink rosette.

Taking over T in the Park, The Donald’s festival featured a Trump Blow Dry Bar, smaller cups (perfect for tiny hands!) and a brand-new 30ft wall around the site.

Check out our Trump in the Park April Fool

2017 – Invites to the royal wedding
2017 was a simpler time for Harry & Meghan, when all they had to worry about was an influx of unsuspecting itisoners turning up to their wedding.

We gave our members the chance to attend the wedding of the year and get a glimpse into royal cuisine with a wedding breakfast of straw-Harry smoothies and scrambled Megs, followed by roast swan and all the trimmings.

2018 – Naked yoga
We love getting face-to-face time with our members, so in 2018 we decided to take it one step further: inviting you to strip off and get sweaty with us.

Minds out the gutter though, it was all in aid of fitness with the first-ever naked yoga session at itison House.

2019 – Fyre Festival comes to Scotland
If there’s one thing we can all agree about Fyre Festival, it’s that it was so good it needed to be brought back.

Fyre Fest 2 headed to the shores of Barra, offering white sand beaches, gorgeous models everywhere… and still no tents or Evian. Hit the link below to check out the promo video we made with Scottish Comedian of the Year Marc Jennings.

From gin boxes delivered to your door to gifts from your favourite local shops. View all Deals For Now